STEINWAY CONCERT SERIES
TICKET SET ON SALE UNTIL THE END OF SEPTEMBER! 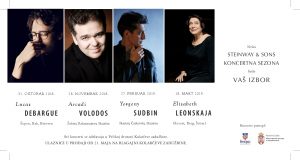 Piano Land and Kolarac Endowment represent the STEINWAY CONCERT SERIES, a unique cycle that represents the most important pianists from the list of this renowned piano producer to the Belgrade audience.

SENSATION OF COMPETITION TCHAIKOVSKY!
The young French pianist Lucas Debargue will perform for the first time in Belgrade on October 31st, and the program consists of the works of Chopin, Bach and Beethoven, leave breathless  the audience at Kolarac! For his performances around the world the audience is looking for a ticket more and critics describe him as a discovery of the decade!

Arcadi VOLODOS is a pianist whose return to the scene of Kolarac has been waited for more than 10 years by Belgrade audience. His previous performances were announced as concerts of the year, and Volodos is described throughout the world as Genius for the piano! Arcadi Volodos will perform on November 28th with the works of Shubert, Rachmaninoff and Scriabin.

Yevgeni SUDBIN, potentially one of the most interesting pianists of the 21st century, according to the renowned The Daily Telegraph, will present to the Belgrade audience selected works by Scarlatti, Tchaikovsky, Scriabin and Prokofiev, a repertoire expressing, in the best way, all his quality.
The concert is scheduled for February 27th.

The legendary “Queen of the Keyboard” Elisabeth LEONSKAJA, in the finishing of the first STEINWAY CONCERT SERIES, will present her lavish pianist talent in interpreting the work of Mozart, Berg and Schubert on March 18th  in the Kolarac Foundation Concert Hall.

The ticket set at a price of 7,000 dinars is on sale at the Kolarac Foundation.

Let the STEINWAY & SONS concert series be YOUR CHOICE!