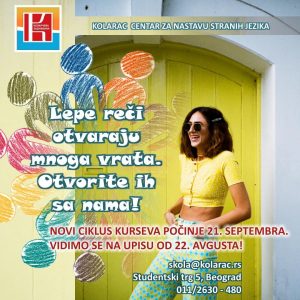 NEW SEMESTER STARTS ON 26 SEPTEMBER 2022
ENROLMENT IS OPEN FOR THE COURSES OF RUSSIAN, KOREAN AND SWEDISH LANGUAGE!

According to necessity, the teaching of other foreign languages, might be organized, in case of trainees’ interest.

Meet the Greek, The Language of The European Civilization , Science and Religion.
This Language is spoken on beautiful islands and taverns, so Greece is becoming more beautiful!!

The Kolarac organize all the other courses – Ordinary and Specialized.

Teaching The Japanese Language is done at The Ordinary Courses at nine Levels.
During The Starter students are taught two syllabaries – hiragana and katakana.

The students are expected to express the following requests, at the end of The Starter Course:
Students should introduce themselves and greet each other.
Say the essential things about himself / herself, his / her occupation, duties, hobbies, and his / her family.
Communicate in a slowlier tempo and ask / answer simpler questions.
Ask questions concerning inner needs. Answer these questions.
Discuss The Health, Food, Drink, Sport,, etc.
Phone conversation.

The students are expected to express the following requests, at the end of The Intermediate 1 Course
Describe The Appearance and The Character of his / her surrounding.
Describe The city or suburb where he / she lives
Give more detailed information about life, habits, employment, friends, but still by using simple sentences.
Order Food and Drink in The Restaurant.
Talk about past and future activities and plans.
Describe travellings and write postcards.

The students are expected to express the following requests, at the end of The Intermediate 2 Course.
Students should be able to understand usual situations and The Standard Conversation about The Common Topics.
Start The Conversation, even not well-prepared about The Topics concerning the personal interest or The Everyday Life.
Use common expressions and phrases.
Asking about everyday needs, buy something.
Write letters.

The Chinese Language is specific and very intresting. It has been taught at The Endowment Ilija M. Kolarac for 40 years.

The courses are divided into levels. There are 35 gatherings, meaning 35 classes.

Starter 2 includes the shorter dialogues, the essential notions of communication, the shorter texts.

The written part covers 160 language characters that enables the combination of the learnt characters and larger vocabulary.

imply complex dialogues, the essential notions of communication and the shorter texts from versatile language fields by practising comprehension and the audio and video projections.
The syllabus has been adjusted to students’ capacities.
WE LEARN THE CHINESE IN THE ENDOWMENT ILIJA M. KOLARAC WITH EASINESS!

The Norwegian national institution for the education development (VOX) has divided the language levels:

The first level (A1), 64 gatherings (32 x 90 minutes). The course offers to the participants the essential knowledge of Norwegian Language (A1 – The European level). The aim is to understand and use the everyday phrases, introduce themselves and others, answer the questions, ask questions about the personal things, communicate in a simpler ways if the co-partner speaks slowly and clearly. We use the textbook “PAA VEI” (1 – 10 modules).

The second level (A2), 48 gatherings (24 x 90 minutes). The course is designed to the participants who completed the previous level A. They have had the essential knowledge of Norwegian Language. The classes will start from Module 10. The participants understand the everyday phrases. They can communicate in different situations (shopping, on the street, in the bank and the post office), as well as about their origin, their family, and the everyday routine.

The fourth level (B2), 48 gatherings (24 x 90 minutes). Participants at this level understand the main information content in a complex language where the themes are actual and the abstract, common and skillful.

Participants may communicate clearly in details within the wide scope of the themes. They participate actively in debates, express the arguments and their opinion fluently and spontaneously, lead the debates without problems. Participants may write complex texts within their professions, retell films and books, describe their experiences and the events and speak in the Norwegian Language spontaneously.

Common European Language Framework for the living languages ( Sw. Gemensam europeisk referensram för språk), was created under auspices of the Council of Europe as a common framework for expertised evaluation and the description of the foreign language knowledge (A – The Basic Language Knowledge, B – Independent Users of the Swedish and C – Advanced User of the Language). The speaker under sub-levels that has been anticipated according to The Common European Language Framework is expected to acquire the following competence:

A1: The recognition and the usage of common words, simple expressions and sentences concerning immediate environment (the family, housing, friends) only when the speaker uses the language slowly and clearly with a little help of the co-speaker. The participant is expected to write simple messages, e.g. Greeting Cards and to know to fill-in the essential data about himself/herself in The Application Forms (e.g. his/her name, address, nationality).

A2: The understanding and the usage of common words and simple expressions concerning personal information about a speaker (the family, the closest environment, his/her job, education and the leisure activities). Understanding the important contents, short, clear, simple messages and statements. Participant should know to write personal letters (e.g. a thank-you note) and to understand short, simple common texts, as well as to find a demanded text, the anticipated information in the advertisements, brochures, menues and schedules. Participant can take part in the conversation and situations which require exchange of the information on the well-known themes, however that has been insufficient for leading independent and spontaneous conversation.

B1: The participant understands main content in the clear, standard language about the well-known issues that he/she encounters at school, at work, in the leisure time, etc. The participant talks about such themes and he/she should know to write a simple, coherent text about these themes. If it is spoken relavively slowly and clearly, he/she can basically understand many Radio & Television programmes, the most current questions or the themes the participant was especially interested in. The participant knows to describe his/her experiences, events, dreams, hoping and future plans, as well as to explain the attitude and the impressions; participant should know to retell the content of a novel or a film. He/she knows to use personal written correspondence.

B2: The understanding of longer conversation (e.g. lectures) and more complex argumentation under the circumstances that the theme is well-known to a certain extent; the understanding of the most news contents as well as current Television programme and the most films where standardized language has been used. The reading of the texts and the reports about the current problems where the attitudes, the contemplation and the contemporary prose has been expressed. The participant can lead a conversation in the natural way with native-speakers, he/she can participate in the discussions about well-known themes and defend his/her point of view by emphasizing the advantages and disadvantages of the various opportunities. The participant should know to write letters pointing out personal point of view, that imply events and different experiences.

C1: The understanding of longer conversation, even when the language has not been structured clearly, when the context is only anticipated. TV programme and films might be understood effortlessly. The understanding of longer, complex expertised and literary texts, stylistic differences and among them, complex expertised texts and longer instructions, even from the fields which have not been so well-known. The writing should be fluent and spontaneous in different situations with not so much looking for the appropriate words or expressions. The idea expressions are precise, with a stylistic adjusting to a co-speaker or reader, with details, well-explained, with a conclusion.

C2: The understanding of Speaking without any difficultires, both in the indirect contact and by radio, TV or films concerning the issue that the listener is adjusted to dialect variations in the Swedish. The Understanding of all kinds of the texts (e.g. the textbooks, expertised texts and literature) including the abstract which have been complex in structural and language sense. Conversation and description have become effortless, by using the everyday idioms, transferring various meaning. The eventual difficulties might be avoided using pre-formulated expressions. Description and stylistic argumentation have been in accordance with the context. Logical structure may be seen. Writing complex letters, texts and reports, summaries and surveys of expertised texts and literature.