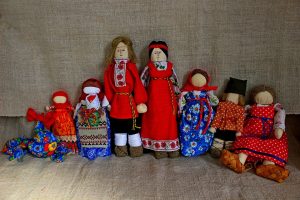 As an introduction to the musical part of this year’s World Music festival “Todo Mundo”, a workshop dedicated to the Russian traditional doll will be held in the Kolarac Endowment  at the Music Atelier (fourth floor).

The program for children over 5 years and their parents was prepared by the ethno-workshop “Other Shores”.

An ethno workshop was founded in Belgrade by Russian women who, in their home country, until moving to Serbia, were actively engaged in folklore and ethnography, until moving to Serbia: Ekaterina van Gerven (Ekaterina Golovkina Folklore Ensemble of St. Petersburg), Anastasia Rumyantseva (Folklore and Ethnographic Ensemble”, Tver), Valerija Ljubičić (Folklore and Ethnographic Studio“ Sretenie”, Omsk) and Natalija Panić (student of artist EV Makishvili in“ School of Folk Doll”). The workshop program covers the story of traditional dolls (in Serbian), Russian children’s folk games and a master class where children and everyone interested will learn how to make dolls.

The accompanying exhibition will feature works by Natalija Panić.

The workshop is free!