THE GIFT IN THE BOOKSHOP
A BOOK AND CD STANISLAV BINIČKI 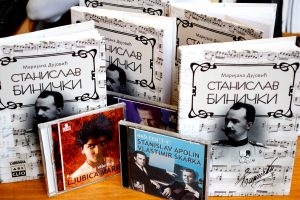 In the “Aleksandar Belić” Bookshop, you can buy Marijana Dujović’s book “Stanislav Binički”, published by Clio Publishing House and get the gift CD with the music of the local composers.

The offer lasts until the end of January.

The monograph Stanislav Binički is a result of years of researching the creative path of this famous personality in the cultural life of Belgrade (and Serbia) of the first half of the last century. ”

From the review by Hristina Medić