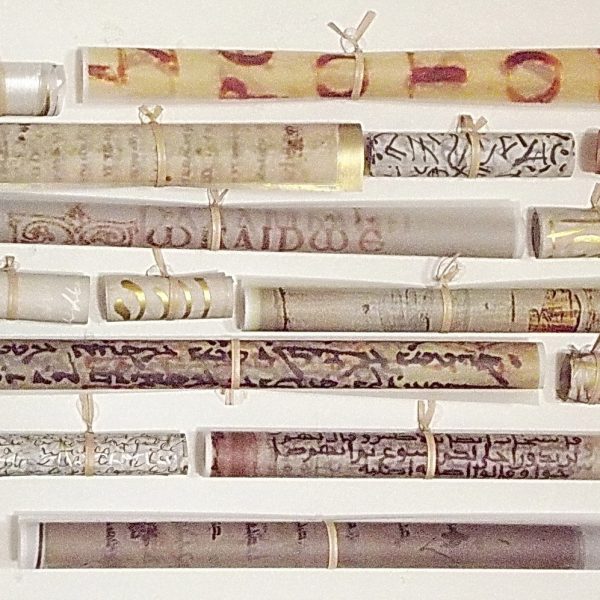 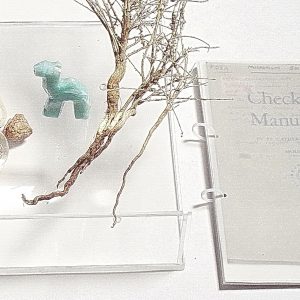 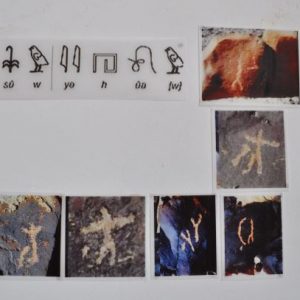 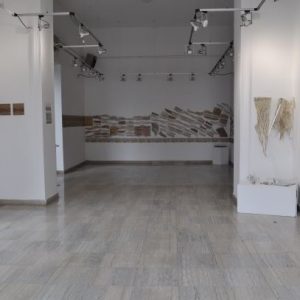 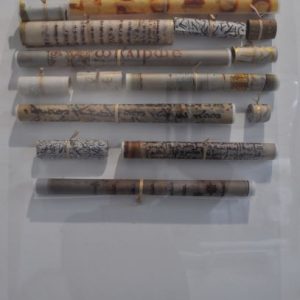 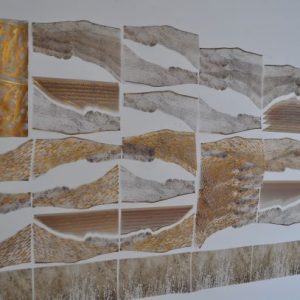 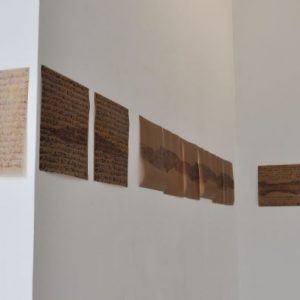 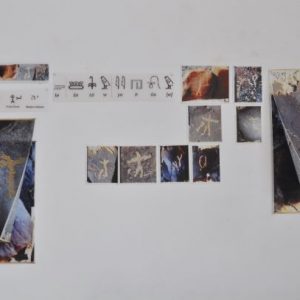 Logos on the move

Peregrinatio is a universal representation of the pursuit of some precious thing that is hard to come by. Such an undertaking was performed by Ljiljana Bursać. As in fairy tales and myths, the artist experienced many obstacles on this kind of expedition, but on her way to the goal, nothing faltered. The goal, however, was not only the destination, but the journey itself. Each such journey is a journey of individuation, that is, the pursuit of one’s own center and integrity. It is seemingly paradoxical for a man to travel to distant lands and embark on dangerous adventures to find himself and his integrity there. Yet, each time it carries its nobility, and in every such way we become better acquainted with ourselves and become more holistic.
Before us are artifacts, pieces of nature, numerous reproduced old writings and new articles, but above all works that carry impressions and a deep original story that fascinated the artist, and this is certainly a good reason for drawing.

From the moment it is created, the soil remembers and preserves the wonders of the human product, if they are in harmony with nature. Time goes by, political boundaries are volatile and temporary, but what is worth it becomes indelible and an integral element of the landscape. That Good that remains is available to anyone who wants to see and / or feel it. It is important to first feel the energy of the soil and space. According to its geography, it emerges on two seas, connects two continents, contains the Sinai Mountains, which is a desert plateau with the highest part lying at 2,600 meters above sea level, and in the northern part is the Sinai Desert, which continues into the Negev Desert in Israel, where the largest natural crater in the world can be seen.

The Sinai Peninsula bears in its memory many civilizations and nations. In the Negev Desert there are unique structures, known as desert dragons, dating to around 7000 BC. The Sinai contains the oldest engraved records on the Proto-Sinaitic script (1900 BC). In the ancient Roman city of Caesarea there are artificial islands of concrete that have resisted all the challenges of time and nature. St. Catherine’s Orthodox Monastery is one of the oldest Christian monasteries. It is located in the south of the Sinai Peninsula, in an inaccessible desert, surrounded by red granite mountains. At the place where the monastery was built, Moses received the 10 Commandments on the stone tablets, and it appears that he saw a burning flame in the bush of a burning blackberry, however, not completely burning. Then he heard the voice of an angel telling him that he was on holy ground. Emperor Constantine’s mother, Helena, built a chapel dedicated to the Virgin in 330 AD, with which Emperor Justinian later built a church. The monastery has the second largest collection of manuscript books in the world, including over 3.500 books. It is similar to Noah’s Ark, which contains, instead of animal species, specimens of art and masterpieces of past times. The monastery looked after them, and today it keeps them from transitoriness. People from all over the world come to see them, revive them, incorporate them and carry on. Ljiljana Bursać is one of these pilgrims of traveling donors.

Ljiljana Bursać was born on 27th October 1946 in Kragujevac, Serbia. She studied at the Academy of Fine Arts in Vienna, Austria, and got her Master degree in the United States, Germany, France, Syria and Israel. She is a member of ULUS and ULUPUDS. She was a scholarship of the Youth Fund 1972–74 and 1975–77. Since 1971, she has organized more than 45 solo exhibitions and has participated in over three hundred group exhibitions at home and abroad. Her works can be seen in respected museum-gallery institutions and private collections throughout the former Yugoslavia and the world. She is the founder and president of the Art Forum.

1999–2000    She prepared the performance Light Bridge on the bridge in Kosovska Mitrovica.

Acknowledgments:
2002 Charter of the Association of Writers of Serbia for the project-performance Light Bridge 2004
2007 UNESCO, Sponsorship for authoring projects, conception and realization of the Art Forum program
2011 Serbian Encyclopedia, SASA and Matica Srpska, Volume 1, Book 2, p. 679-680

The exhibition will be open until Oct.12th every day except Sunday from 10am to 8pm.